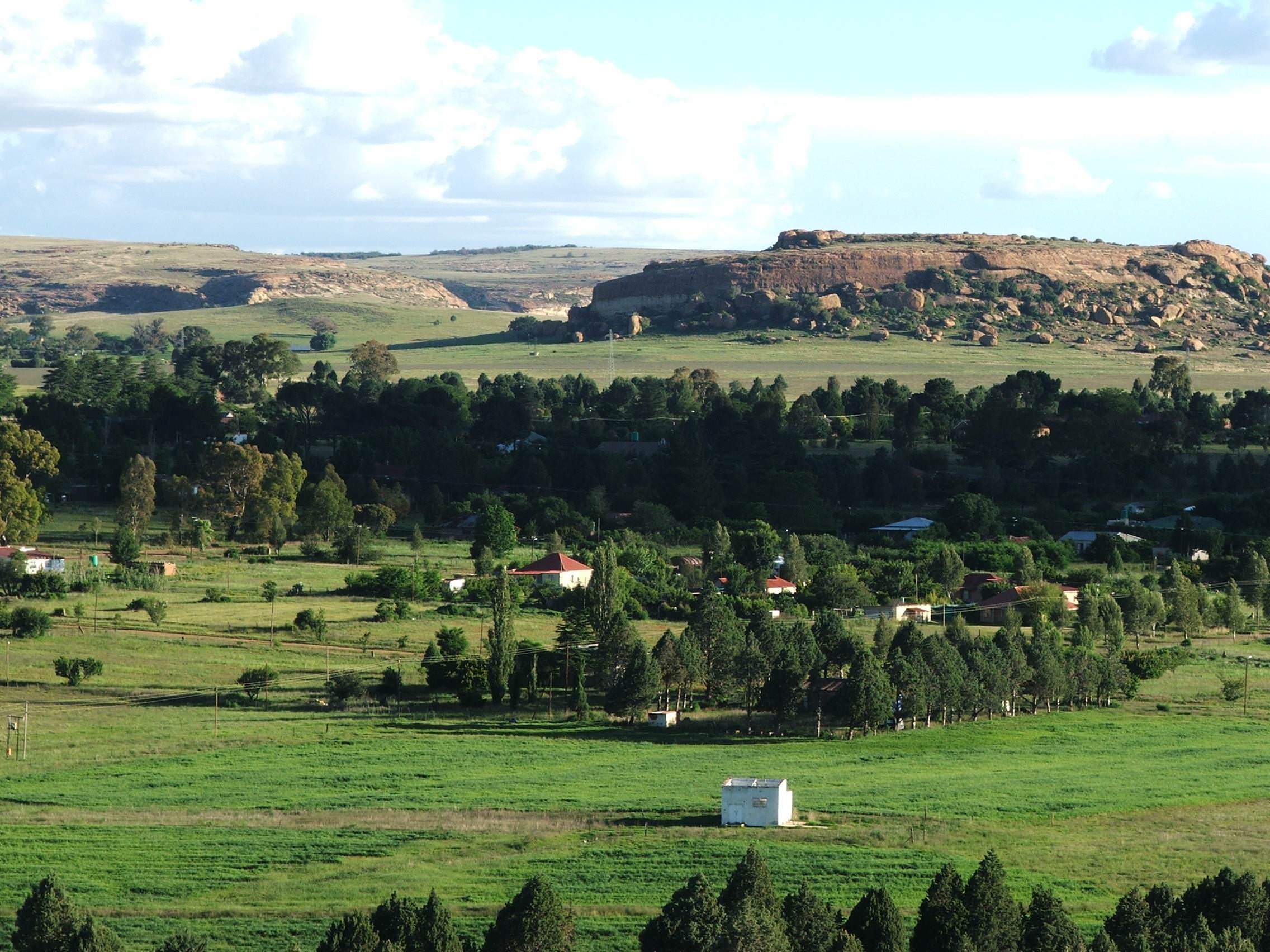 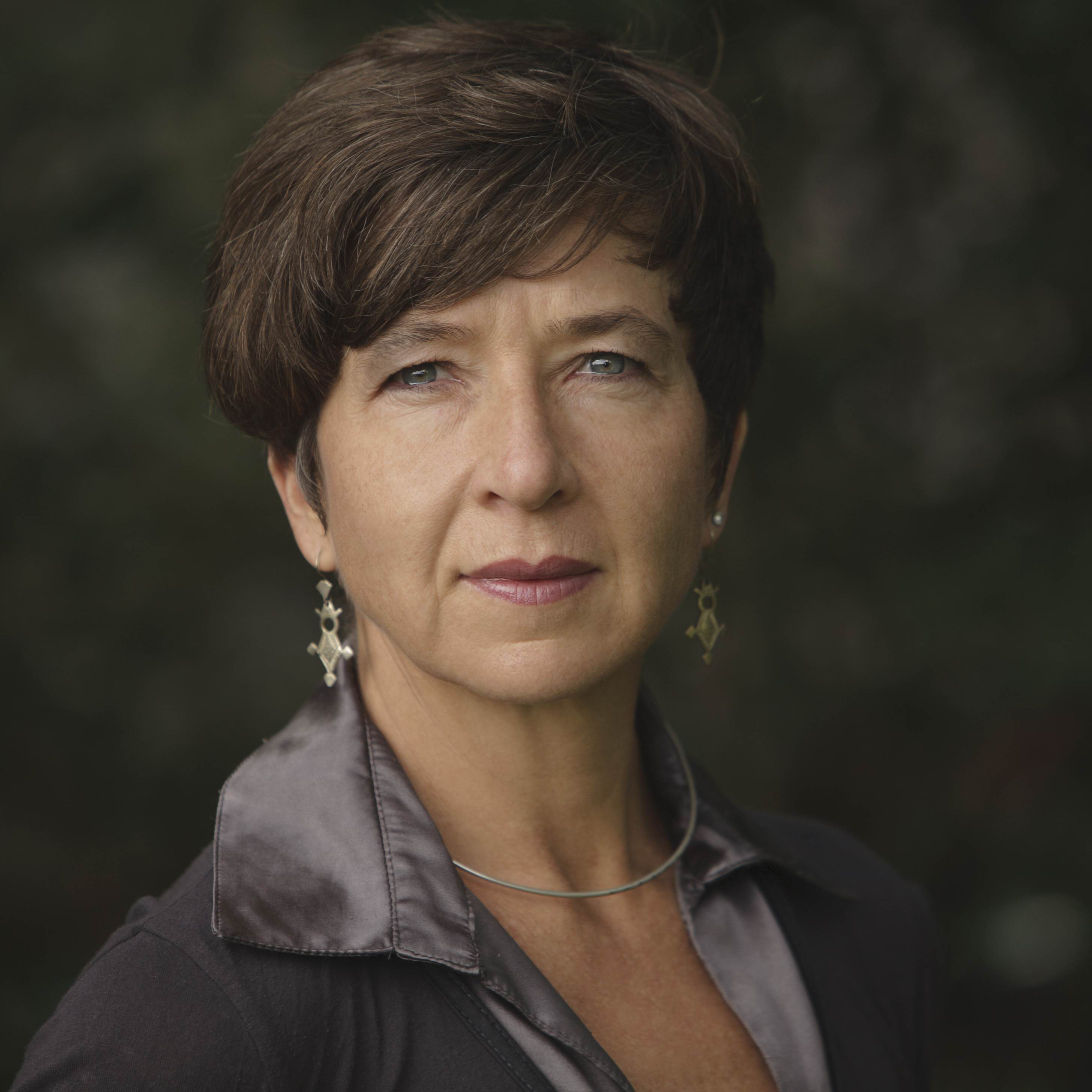 The Talking Table is hosting a creative writing workshop presented by Bronwyn Law-Viljoen! The workshop will take place from 25-30 January in the eastern Free State village of Rosendal.

To book: Write to info@thetalkingtable.com before 31 December 2018.

Bronwyn Law-Viljoen is Associate Professor and Head of Creative Writing at the University of the Witwatersrand, editor and co-founder of Fourthwall Books, and former editor of Art South Africa magazine.

She has a PhD in Literature from New York University and a PhD in Creative Writing from the University of the Witwatersrand.

Her first novel, The Printmaker, was published in 2016 (Umuzi) and shortlisted for the Sunday Times Barry Ronge Fiction Award.

The Talking Table is a creative hub operated by two South Africans on the Greek island of Lesbos.

Rosendal will be their second workshop in South Africa.

Rosendal is a beautiful eastern Free State hamlet in the foothills of the Maluti Mountains, three and a half hours’ drive from Johannesburg. 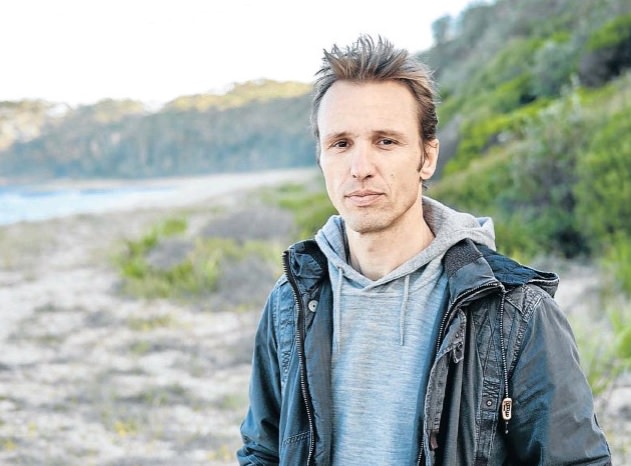 Markus Zusak wanted ‘glories and tragedies and courage, all in a suburban setting’. Picture: Supplied

What was the genesis of the story?

I was 20 years old, and always felt really committed to being a writer. I used to take long walks around the neighbourhood I lived in and, once, on one of those walks, I saw in my mind a boy building a bridge. I named him Clayton. I thought I would call the book Clayton’s Bridge, and then a few months later, I thought: No, not Clayton’s Bridge – make it Bridge of Clay. And that was the instant when a whole new depth of meaning and emotion entered the idea.

I saw a boy making a bridge of stone or wood, but also of himself. He would mould his whole life into that bridge and within that idea there was the idea that Clay is both a name and a material – and clay (the material) can be moulded into anything, but it needs fire to set it … I was seeing new beginnings forming, and a definite ending. I just wasn’t ready yet to write it.

Which elements of the book were there from the start, and which came later?

I actually did write a version of this book in my early 20s, but I knew already then that what I’d produced wasn’t what I was looking for. You’re always looking for what you feel in your mind is what you then feel in the pages.

It was in 2006, after The Book Thief, that I started collating new ideas for the book, including a family of five brothers, a mother who had travelled to Australia from Eastern Europe, and a father who had once been obsessed with Michelangelo and, in particular, the Statue of David and his unfinished works, the Slaves (or Prisoners).

The elements of The Iliad and The Odyssey greatly enrich the story. Are these works that have influenced your own life?

It started because of nicknames. I seemed to immediately gravitate towards giving all the Dunbar brothers nicknames (for example, Clay is the Smiler, Rory is the Human Ball and Chain, Matthew – who narrates the story – is the Responsible One, and so on), and it reminded me of how in The Iliad and The Odyssey, Achilles is never just Achilles; he’s the fast-running Achilles, and Hector is the tamer of horses, or Hector of the glittering helmet.

I started to feel a sense of suburban bigness to things. We often think our lives are small and mundane, or that we live in places or houses where very little happens. But then you start to realise the amount of travels that have been made to arrive in these places, and that we all fall in love, we all have people die on us. We laugh and live and love, and all of these things loom hugely, at times, inside us. And I wanted to write about those things.

I wanted to write a big and big-hearted story in what Matthew sometimes calls the suburbs-world. I wanted glories and tragedies and courage, all in that suburban setting.

Can you expand on the use of the bridge as a metaphor?

I think I’ve always thought of bridges being part of books and stories. As the narrator of Bridge of Clay, there are times when Matthew talks to the reader a lot, about the distance between him as the writer of the story and the reader as the recipient. I’ve always imagined that as well – that I’m writing in one place, and the words are stretching to wherever the reader is reading the book. In that way, the reader is part of the book, even in the act of writing it.

In a more direct and story-oriented way, the bridges in Bridge of Clay are everywhere. Clay, especially, is building a bridge for his family, to bring it back together, but he’s simultaneously finding his own way of leaving. It’s both a bridge towards home and beyond it. And Matthew is building his own bridge, not only to an understanding of his brother, but to a new understanding of just how much he loves him. It’s why he’s writing the story: the words are a proof of love.

I read Bridge of Clay directly after finishing Tim Winton’s The Shepherd’s Hut and I feel it raises similar themes of masculinity, the question of how to channel young men’s energies and sensibilities. In short, how do we raise good men? Could you comment on that?

Probably the first way is to tell the truth, which isn’t to say that boys will be boys, and be done with it. My first priority is always to write from the inside out, which is to serve the characters of the book, and the story. What I’ve arrived at later is an understanding that if I was subconsciously trying to do anything, it was to write about boys in a way that shows them both how they are, and how we’d like them to be.

The Dunbar boys are rough and boisterous and raw, but I hope they’re beautiful too, and full of love and loyalty, and even tenderness. Maybe the first way to address this idea of positive masculinity is that it’s actually pretty complex.

One of the bigger lines in Bridge of Clay is when Matthew says, “It’s a mystery, even to me, how boys and brothers love.” Like everything else worth fighting for in our lives, the idea of raising good men feels to me like something that never ends. It will to and fro between triumphs and failures, but the centre feels a lot like Clay and his brothers themselves; they fight and scrap and argue their way through the world and each other, but they never give up on each other either, or on themselves. @michelemagwood

Established as a title in 1896, Ons Klyntji has risen, died, been reborn, died off again and finally been reinvented somewhere in the murky 1990s to become what it is today: a 144 page, pocket-sized annual of the doen en late of South Africans at home and abroad.

Afrikaans and English sit side by side (plus bits and bobs of other languages) to create a kind of restless vernacular in poem-form, short story-shape, photographs, cartoons, funny things, rude things, sad things and just plain truths too.

The 2018/19 edition of Ons Klyntji Internasionaal will be launched at The Book Lounge on Wednesday 5 December at 5:30 PM for 6 PM.

Zines will be on sale. RSVP to booklounge@gmail.com

Oh yes, there will be free wine!

Ons Klyntji is sponsored by Oppikoppi music festival and Woordfees. 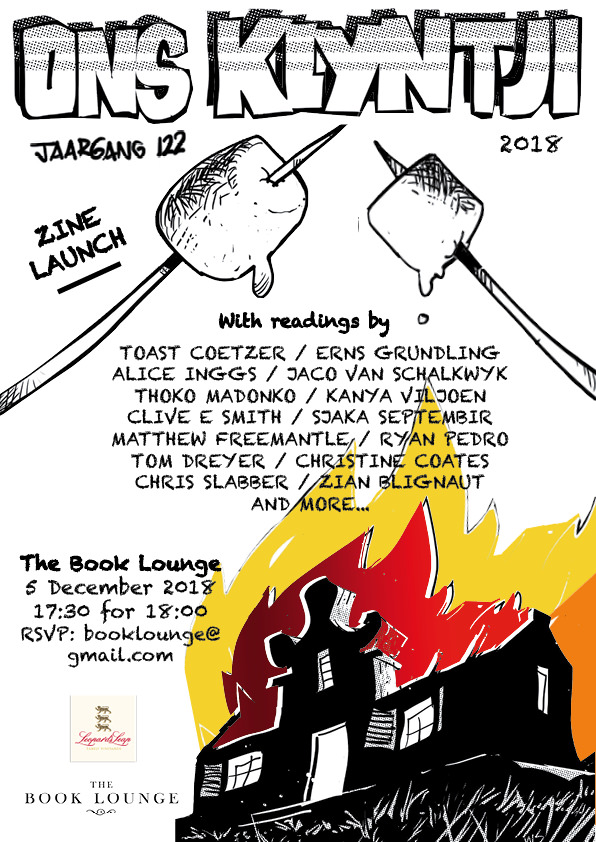 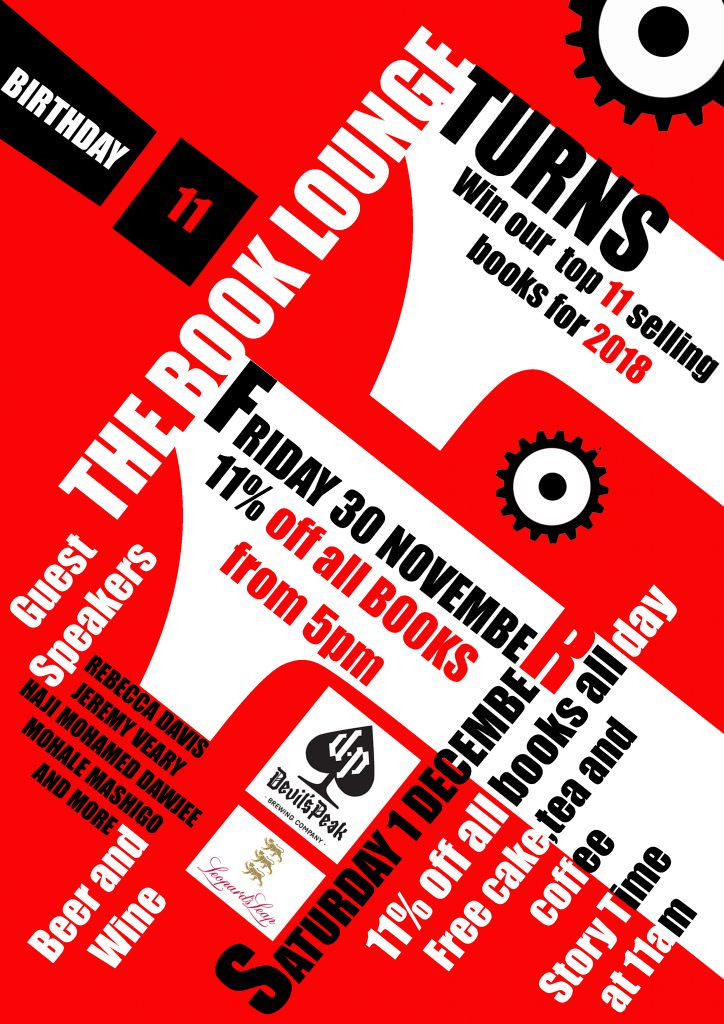 A pleasing vignette of our favourite cop: William Saunderson-Meyer reviews Deon Meyer's novella, The Woman in the Blue Cloak 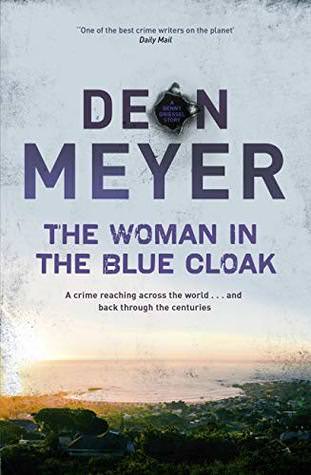 One of the great things about Deon Meyer’s work, aside from his infallible ear for the nuances of South African life and his masterful plots, is that they are satisfyingly fat books.

Buy a Meyer and you’ve got the whole weekend sorted.

The Woman in the Blue Cloak, however, is a novella, weighing in at a mere 26,000 words and was written on invitation for the 2017 Week of the Thriller in the Netherlands.

It’s a challenging format, since there just isn’t the same space to build plot and character. Meyer writing a novella is a bit like a world-class marathon runner entering the 100m.

It is interestingly eccentric but one would be naive to expect a gold medal performance.

And so it is with this offering: a pleasing vignette of our favourite cop, dry alcoholic Benny Griessel, but just not enough meat to be anything more than an appetiser. @TheJaundicedEye 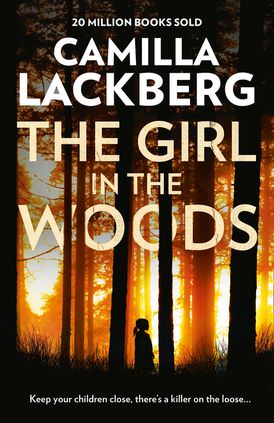