Winging It is the poignant, tender and at times downright funny story of Jonathan Kaplan's decision to have a baby by surrogate 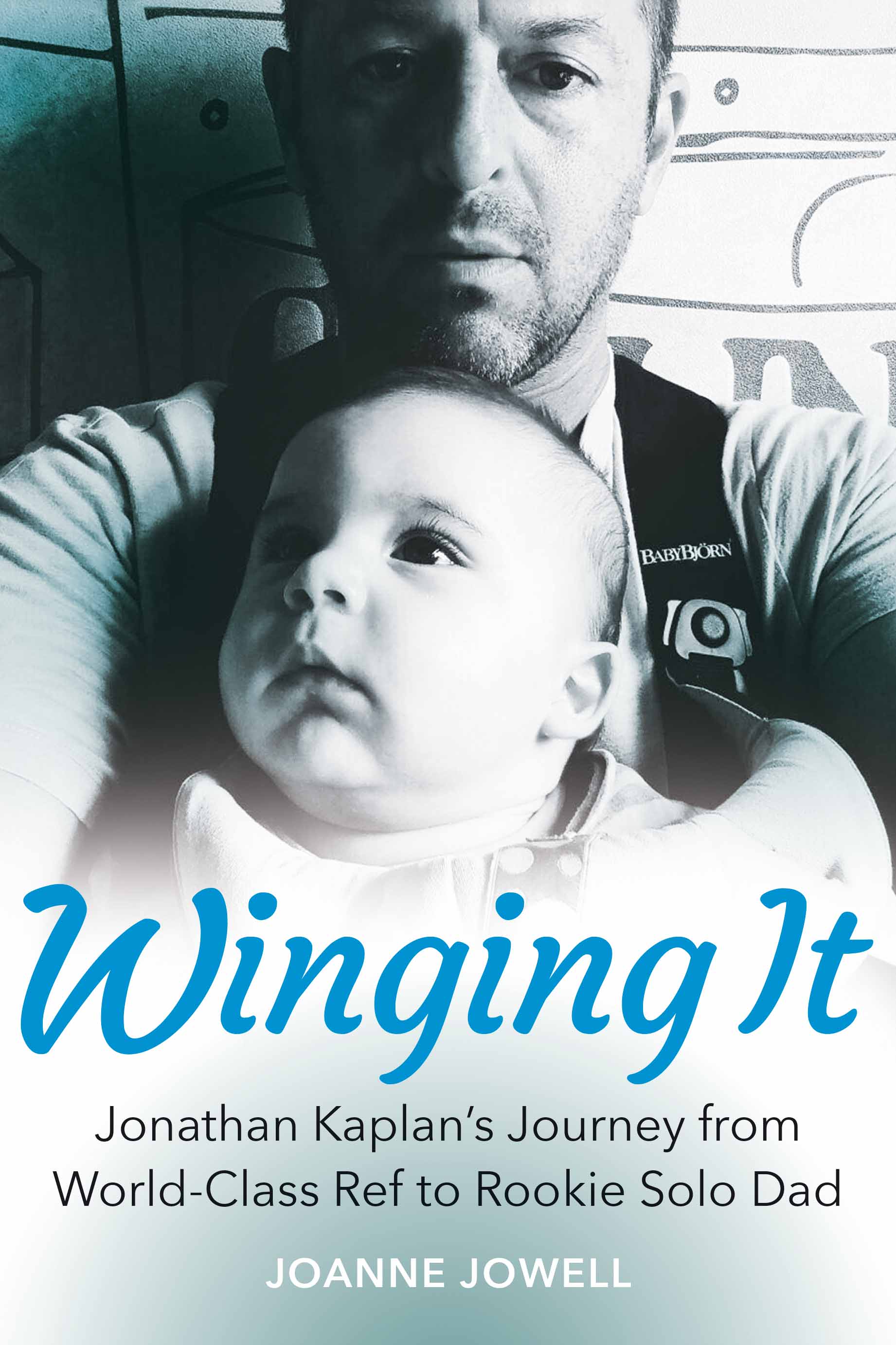 Jonathan Kaplan, celebrated international rugby referee and former world record-holder for most Test caps, had his fair share of challenging moments on the field.

He was known for his commitment to fair play, ability to defuse tense situations, and courage in making difficult, and sometimes controversial, decisions. All this would stand JK in good stead and come back into play when, at the age of 47, he made two life-changing decisions.

The first was to blow his whistle for the last time and end his career as a professional rugby ref. The second was to become a parent – and a solo parent at that. This is the story of JK’s decision to have a baby by surrogate, the two-year fertility process that followed, and the subsequent birth of his son Kaleb.

Winging It draws on the insights of key role-players in JK’s journey, including the extraordinary experience of the surrogate mother herself. Exchanging rucks for reflux, mauls for milk bottles, scrums for storks (and other stories about Kaleb’s conception), this account of how JK navigates the choppy waters of parenthood is disarmingly frank and scrupulously honest.

At times poignant and tender, and at others downright funny, this is a thoroughly contemporary take on what constitutes a family and how we dare to build one.

Joanne Jowell is the author of the bestselling biographies On the Other Side of Shame: An Extraordinary Account of Adoption and Reunion (2009), Finding Sarah: A True Story of Living with Bulimia (2011) and The Crazy Life of Larry Joe: A Journey on the Streets and Stage (2014). She lives in Cape Town with her husband and three children.

PE Book Launch: I'm the Girl Who Was Raped by Michelle Hattingh Fogarty’s and Modjaji Books invite you to the Port Elizabeth launch of I’m the Girl Who Was Raped, a memoir by Michelle Hattingh. The author comes from Port Elizabeth, so she is back in her home town talking about her incredibly courageous book.

“Compelling, clear and beautiful writing on such a necessary topic. She shatters rape myths on every page.” Jen Thorpe, gender activist and author of The Peculiars.

“Many people think middle class women are magically immune to rape or that if they are raped their easy access to the resources they need will be everything they need to recover completely. A book that discusses the cross cutting nature of the pain all women must feel when a man rapes them can only be welcomed in a time when communities across South Africa struggle with high rape rates.” Kathleen Dey of Rape Crisis

More about the book:
That morning, Michelle presented her Psychology honours thesis on men’s perceptions of rape. She started her presentation like this, “A woman born in South Africa has a greater chance of being raped than learning how to read …” On that same evening, she goes to a party to celebrate attaining her degree. She and a friend go to the beach; the friend has something she wants to discuss. They are both robbed, assaulted and raped. Within minutes of getting help, Michelle realises she’ll never be herself again. She’s now “the girl who was raped.”

This book is Michelle’s fight to be herself again. Of the taint she feels, despite the support and resources at her disposal as the loved child of a successful middle-class family. Of the fall-out to friendships, job, identity. It’s Michelle’s brave way of standing up for the women in South Africa who are raped every day.

Michelle Hattingh was born in South Africa in 1988. She attended school in Port Elizabeth and studied Politics, Philosophy and Economics at Stellenbosch University. She went on to do her Honours in Psychology at Cape Town University and now lives in Cape Town. Michelle works as senior online content producer at Marie Claire SA. Her work has been published in Elle SA, Marie Claire SA and Mail & Guardian. I’m the Girl Who Was Raped is her first book.

As a parent and a teacher, Monique le Roux Forslund has first-hand experience of the effect food has on children. She has seen how sugar and other fast-acting carbohydrates can cause them to become over-active and struggle with concentration.

In Healthy Food for a Healthy Baby she shows you how to give your baby a healthy and nourishing start to life. In addition to more than 100 easy recipes appropriate for babies aged six to 18 months, there are tips about natural good food to ensure that your child maintains all-round good health. Although this is not a “low carb high fat” recipe book, the recipes do not include wheat flour and sugar.

In addition, there is information on encouraging your child to develop mealtime independence – aka baby-led weaning (BLW) – much sooner than you’d expect.

Now based in Sweden, Monique le Roux Forslund grew up in Cape Town and is a regular visitor to South Africa. She is a licenced health coach, fitness instructor, teacher and mother of three, with well over 20 years’ experience working with children. She has one of Sweden’s most popular health blogs (more than 430 000 page views/months and growing) and is regularly asked for advice, tips, ideas and recipes. She enjoys experimenting with different tastes and flavours and is passionate about cooking. Her book Low-carb Living for Families was published by Struik Lifestyle in 2013.

Nothing in life comes easy. Not publishing your first book, not attending your book launch and lastly, but most definitely, not motherhood. However, at the launch of Pamela Power’s debut novel Ms Conception these facts were trumped by one simple truth – the author’s resolve to face problems laughing.

The event was a joyous celebration from start to finish, and could not be hindered by a forgotten manicure, a car crash or SONA 2016 rehearsals. Power’s friend and fellow author Karina M Szczurek made it to the launch in the nick of time to host a lively discussion of a book that “reminded me why I am not a mother”.

Unbeknown to the audience, she was not almost late due to traffic caused by road closures around Parliament for the 2016 State of the Nation Address, but due to having just survived an accident on the N2. Fortunately she was unscathed and in good spirits, ready to roll on with a fascinating interview.

Gathered in The Book Lounge were old and new friends, blood and bookish family and, of course, fans of Power’s work. With the sounds of a marching band practicing in the background, Power shared the story of her long journey to being an author published in paperback. Having started her novel as a reaction to motherhood and her husband doing his MBA, she faced challenges getting it published. In 2012, Louis Greenberg took a chance on her, publishing Ms Conception in digital format. Three years later the manuscript caught Penguin’s attention, with Fourie Botha signing Power on to their roll.

Ms Conception is a hilariously twisted and very realistic take on being a mother – from the pain of childbirth to the yearning for a time before the constant smell of vomit. Power insists that the story is all fiction, but admitted to being heavily influenced by her own experiences of being a mom.

It’s only once you’ve had the baby that you realise that you are going to be in a milk and vomit stained dressing gown, 10 kg overweight, possibly weeping, having had no sleep – you are not going to be going to a meeting!

Dark humour and dialogue was highlighted as two strengths of the novel and the author alike. Power said that her sense of humour often gets her into trouble and that the challenge was to tone it down at certain points. The jokes and dialogue come naturally to her, as she earns a living by writing and editing television scripts. “If I could write an entire novel in dialogue I would!” Power said, admitting to struggling with the narrative parts.

Not that the narrative of Ms Conception is lacking. The story sweeps readers along, rushing them to turn page after page as they read about Jo de Villiers’s maternal misadventures. Despite what it might sound like, this book is not just for woman. On the contrary, Penguin Random House MD Steve Connolly pointed out in the Q&A session, “It’s the funniest book I read last year!”

What’s next for Power? A psychological thriller, very different to Ms Conception, will see the light later this year, and then readers can expect another domestic suspense novel, in a similar vein to her first book, next year.

Cyber-crime: South Africa the most targeted country in Africa

South Africa has the highest rate of cybercrime on the continent‚ a report by United States-based technological giant Cisco revealed on Monday.

Greg Griessel‚ consulting systems engineer security solutions at Cisco South Africa‚ said: “Cyber criminals are getting smarter and employing a number of personalised tactics‚ which places businesses at greater risk. 92 percent of business leaders agree that regulators and investors will expect companies to manage cyber-security risk exposure. These leaders need to essentially increase measures to secure their organisations’ future‚ particularly as they digitise their operations.”

Griessel believes that an understanding of the tactics employed by cyber criminals is an absolute necessity.

“Businesses are up against security challenges that inhibit their ability to detect‚ mitigate and recover from common and professional cyber-attacks‚” he says.

“Aging infrastructure and outdated organisational structure and practices are putting them at risk. The South African public and private sector need to understand what they are up against and arm themselves before the worst case scenario becomes a reality.”

The report says that only “45 percent of organisations worldwide are confident in their security posture” as today’s attackers launch bold and sophisticated campaigns.

“The study sounds a global call-to-arms for greater collaboration and investment in the processes‚ technologies and people to protect against industrialized adversaries.”

The following books are indispensable guides to the digital world in a South African context: